Competition for environmental and urban regeneration of the covered market

An open courtyard to build a new center. Several factors have come together to create a project on a human scale, well inserted in the history and current characteristics of the country; on one hand the symbols of Forte dei Marmi in the collective, on the other, the central project area connotation, partially offset, because of a pre-existing underground water channel today, than roads north-east / south-west (Mountains / Sea) that characterize the development in the entire urban settlement chessboard. The new market provides for the complete demolition of the existing centralized building. The proposal of an open courtyard is an innovative system of integration between trade, residenza, facilities and surrounding landscape. The main alignments of the court arise from pre-existing sediments builders of the project site. The building thus assumes the character of the hinge between two different scores, the historical one of Forte dei Marmi and the exceptional nature of the block overlooking Via Vittorio Veneto. And 'it is foreseen the complete redesign of the so-called "Street Market" – connection between Via Piave and Via Vittorio Veneto – with appropriate alberature, stops for loading and unloading goods, stone flooring and new lighting for the pedestrian area in front of the existing business units in the street. Access to residences instead of Via Piave, characterized by the presence of exquisite villas. Behind the building of the Market, well protected by a landscaping behind the block overlooking Via Piave, is a new private one-way street with bollards opened, for exclusive use of the market. The pedestrian entrance to the market is expected to Via Ponchielli, the entrance to the underground parking from Via Vittorio Veneto, the entrance to the residences from Via Piave; the meaning of existing roads have not been modified.

A new urban route. The building, of which one has a view for parts and never for whole, It came into the project with three main entrances: the entrance to the pedestrian cycle Market from Via Ponchielli, the entrance to underground parking from Via Vittorio Veneto, the porch entrance to the residence from Via Piave. The 'three heads' are joined by an open courtyard to a floor with a pitched roof, delimiting the new square, pivoted on an artificial canal and an urban garden. The canal, marks the boundary of the houses of Via Vittorio Veneto and defines the urban landscape and material of the court, covered with marbles of Versilia.

Via Ponchielli – A fountain introduces the pedestrian entrance. A large atrium open dialogue with neighboring residences: the pitched roof, the measured openings form an indoor-outdoor combined loggia and covered shelter for bicycles. The building is expected in reinforced concrete covered with a contemporary ventilated façade with open joints in marble of Versilia; a "technical" facade that hides impermeabilizzazioni, thermal insulation, rain. On the balcony overlooking the main exit of the car park and the entrance to Market. Showcasing continuous tape, with overlying iron beam (Memory of the bridge cranes neighboring marble workers) leading to markets. Path, in axis with the double-pitched roof, the windows on both sides, the presence of large skylights shielded externally by vertical brise soleil wooden slats, reinterpreted in a contemporary way the traditional type of market. In the building there are three types of frames, equipped with colored curtains and placed in the facade with an asymmetrical and functional rhythm: the window to loggia, with the typical size of a window, clenching tape, to mark visual outward, the frame to bow window, to expand the interior space.

Market Square – The outer rooms have described the sediment and the whole project features, marked to outline a public serene, civil and rich in finishing materials. The court develops through a sequence of gardens, pavements and streams. The river is a historical memory of a country landscape that emerges in this, accompanying the path of the cycle path. a fountain, located in the proximity of the bar, the flume, bordered by laurel hedges, the large pool near the entrance (where it relocated in the existing bronze statue) ordering the sequence of spaces. The gardens, located above the parking lot with ground tanks around 70 cm deep, They are designed as a sequence of small urban gardens, imagined as a place of discovery and learning for nursery and primary schools.

The garden smells, planted with fragrant tree species, It will face the garden of flavors, planted with fruit and vegetable essences. Around it is planned the planting of an orchard of low trees. A stage / high seating hides a part of ventilation of car parks and outlines a place of relaxation and recreation. On the court facing the bar and all market business. There will be new stone paving of Versilia, forming within an urban fabric rich in green a large square material on a human scale.

Via Vittorio Veneto – The vehicle ramp, with automated inputs placed on the path, leading to the underground car park 170 parking spaces (others 30 They are provided on the surface for loading and unloading of goods and for the stop in rotation); the aeration grids are provided in correspondence of the sidewalks. On the ground floor the head of the building houses a bar / fish that will give life even in the evenings the square.

Via Piave – On Via Piave insists residence, It conceived as a building in its own right without clear views of the surrounding streets. The windows are opened on the ground floor of the private gardens, on the first floor towards the axis thermal helium. A public arcade covered with stone leading to the market and along the entrance hall of the residences, with scale and elevators in view and a small storage for bicycles and wheelchairs. The stairs lead directly to the car park below. The flats, two and three, all have private gardens or large terraces wood-paneled exterior. 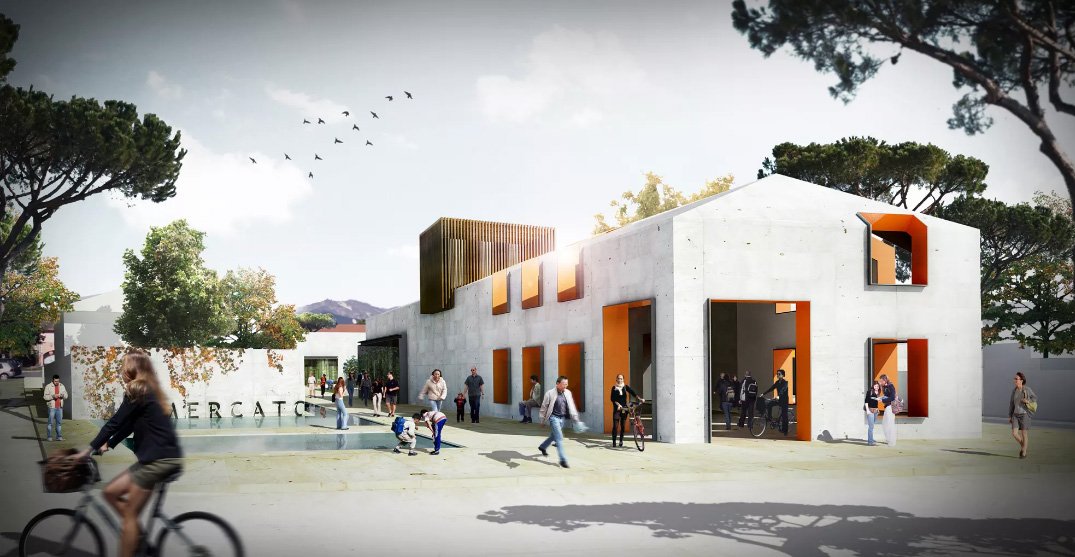 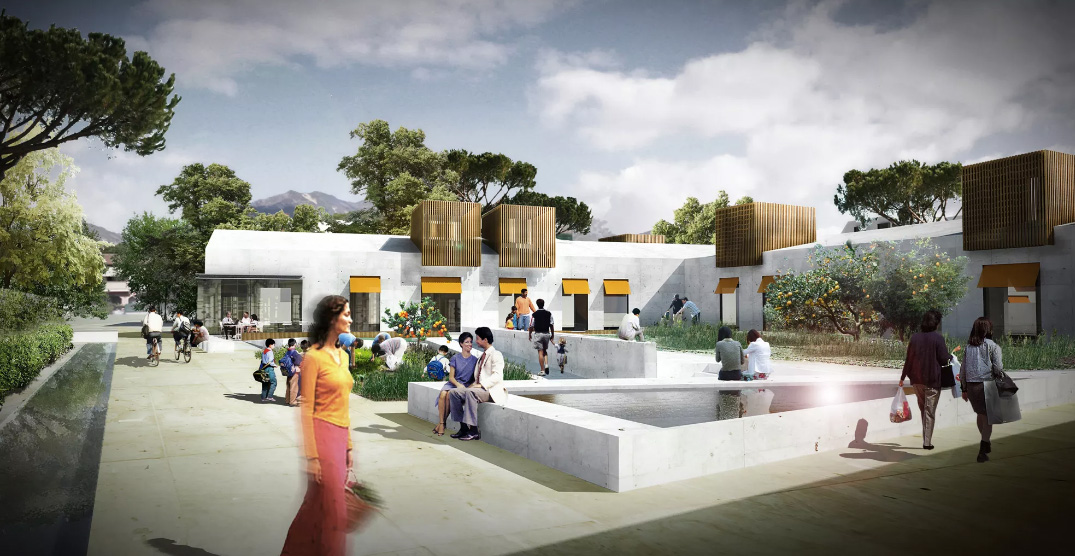 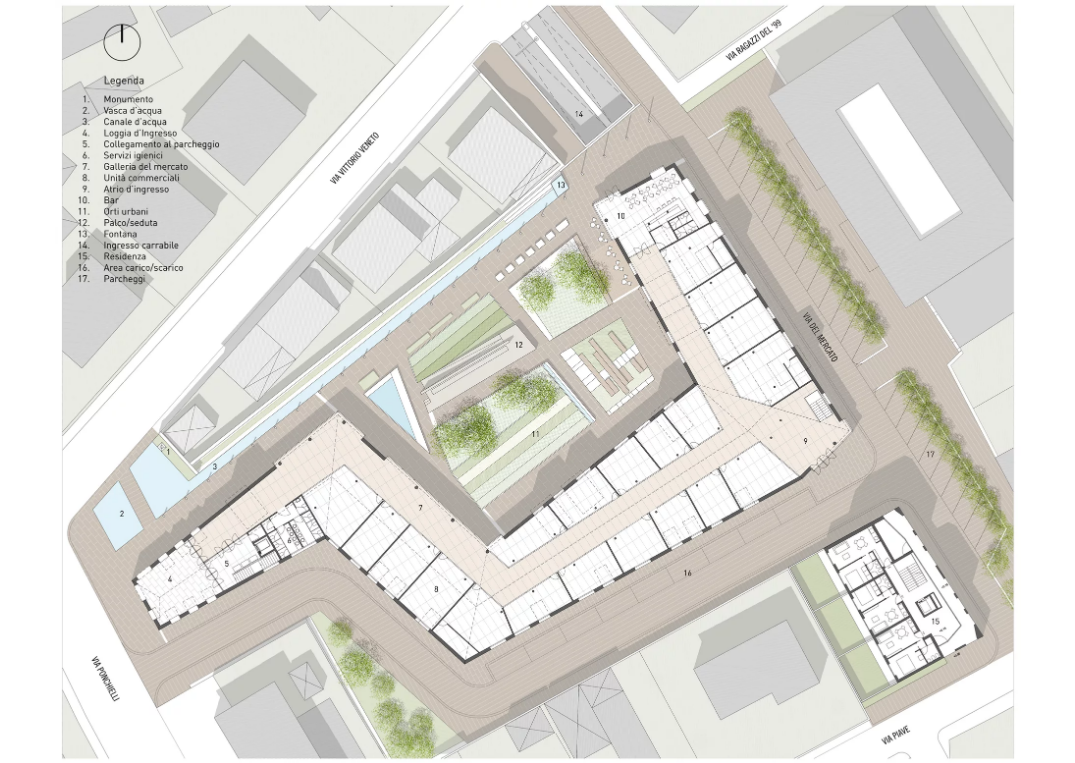 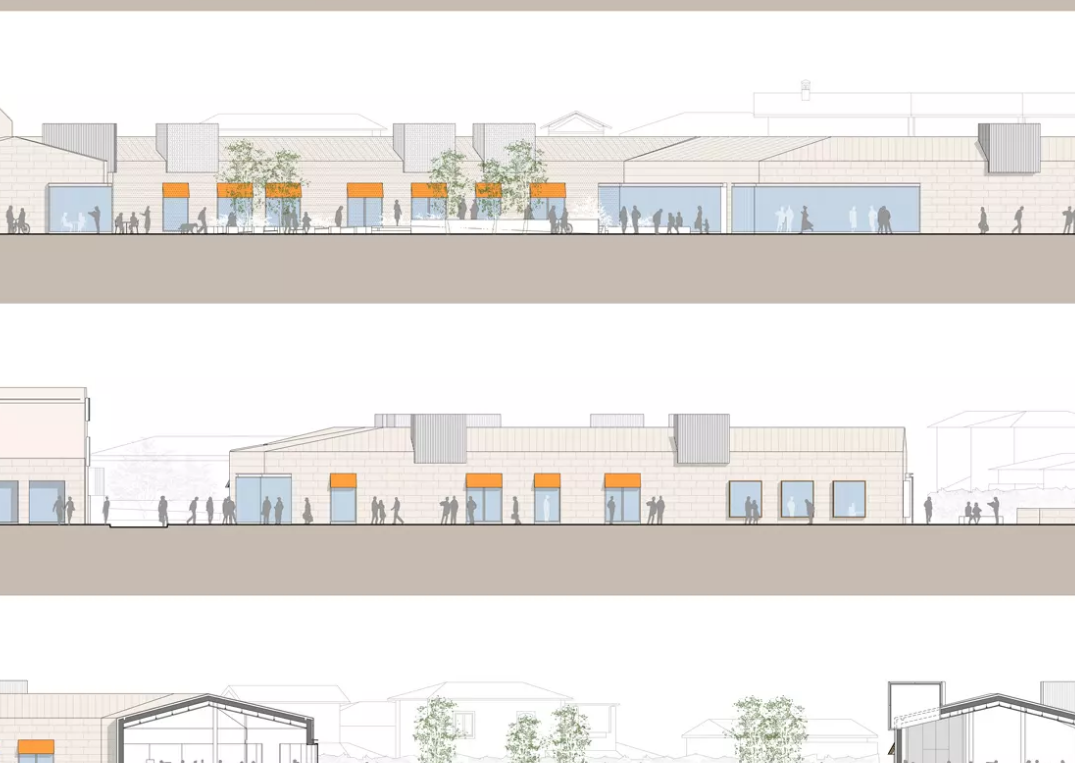 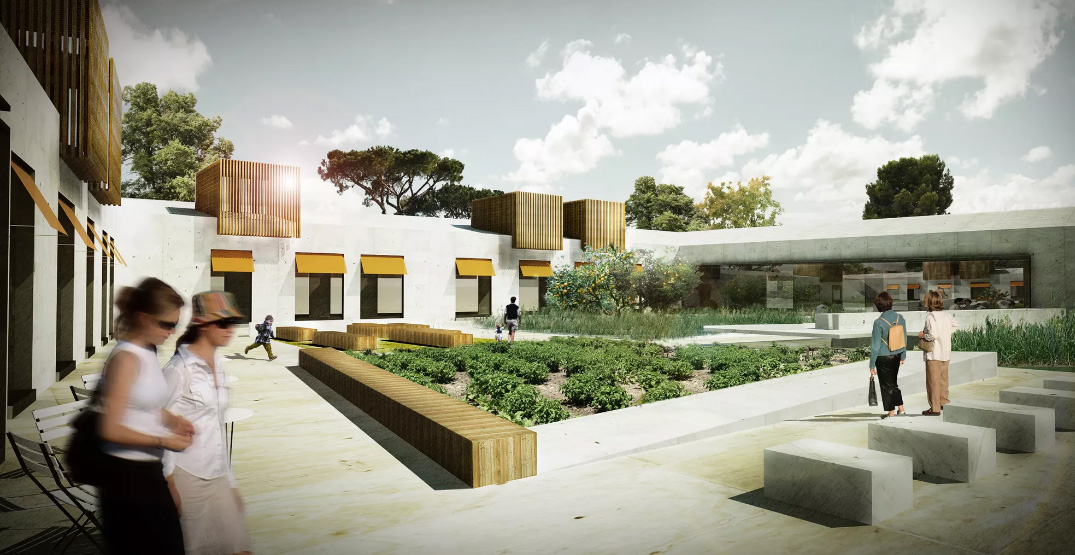 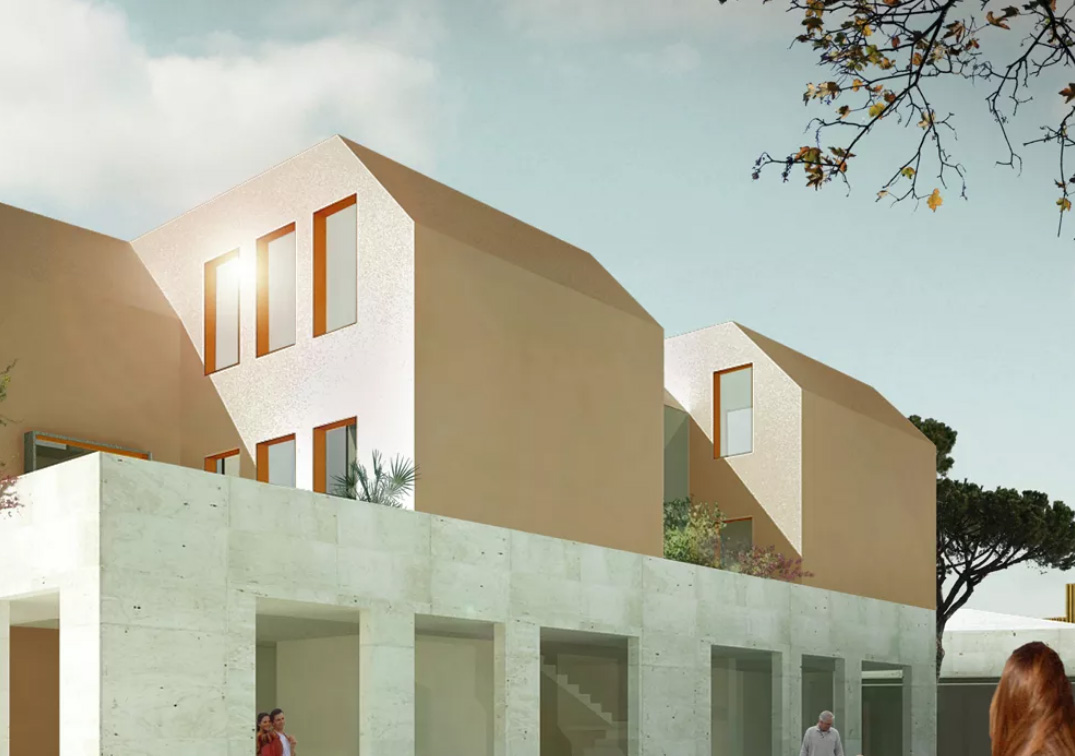 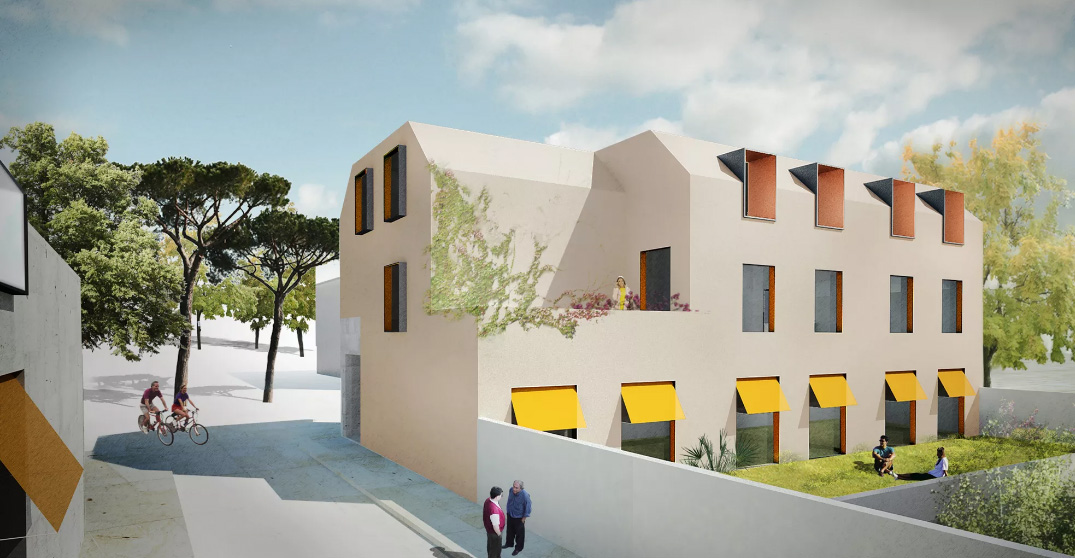