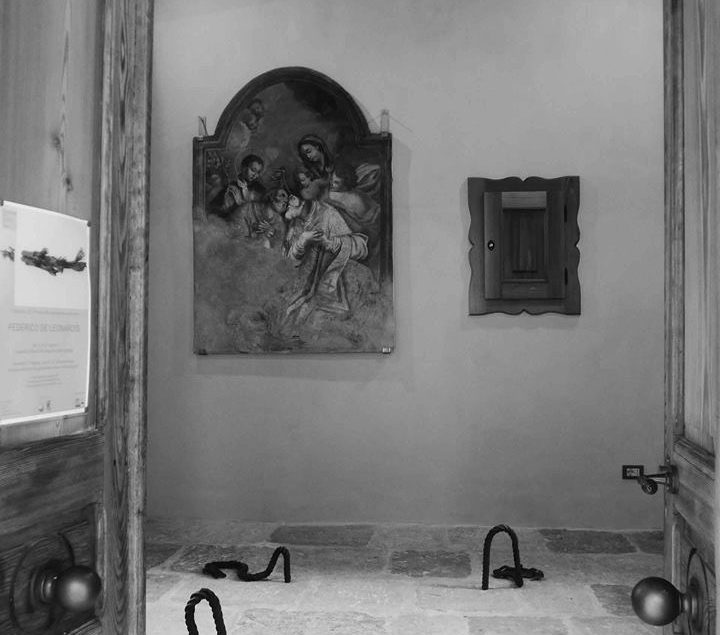 The second edition of the Prize Macugnaga, sponsored by the City of Macugnaga with the MAC Association, see the assignment of the recognition Federico De Leonardis.
From 13 al 31 August 2017 you can visit the installation created by the artist at the Chapel Church S.M. Assumption of Macugnaga, while the 13 August at 21.15 at the Kongresshaus is scheduled to meet with De Leonardis, the delivery of the Prize and the screening of a film about his work.

On display Federico De Leonardis presents an installation of sculptures reflecting on finding places identity, man, art itself. The work Without, It consists of four ropes bronze folded at the sides of the eighteenth century that emerge from the floor of the Chapel of Macugnaga, It evokes the world of work - particularly that of the diggers mining, protagonists of the economic development of the country since the fifteenth century - and at the same time leaves emerge suggestions on the stratification of a memory, a personal experience, touching spheres of universal sense.
The work that the time has on the past is the subject of reflection also in the works entitled Shelley Bones, inscriptions on marble slabs engraved that pay homage to different poets, where the deletion of the word brings out the romantic beauty of the stone, the material, and the nature.

Federico De Leonardis
Federico De Leonardis (Spice, 1938), architect and engineer training, After a long training in urban planning (industrial development plans and tourism in Southern Italy and Yugoslavia), from '78 he is dedicated exclusively to sculpture and installation, exposing both in Italy and in Europe (Belgium, Germany, Austria, Portugal and Switzerland) with important galleries (Go on, in Tuscany, Belvedere, in Milan and Galleria Rizzo, Venezia) and in numerous solo and group exhibitions (remember for all Art Shipyards, former Binda in Milan, Polemos, the Castello di Gavi and the large permanent installationSlot and contravvento Parking at Peccioli, Pisa). Always interested to workplaces, He realized above all in the works site specific, attentive to the characteristics, historical and physical properties in a broad sense, space that houses them (An example can be seen today in Venice, in a solo show at Gallery Rizzo). Intellectual busy, has to his credit several publications (In shape, Eclipse, Extempora, La Casa di Alice, Negative) and has a blog (Out of the teeth). His everyday objects, appointed by him of "antidesign" (lamps, libraries, tables, chairs etc.), They have been published by major magazines (Domus, Arca, Interior, Octagon and other). He lives and works in Milan 1963.