Ideas competition for the acquisition of a creative proposal once the redevelopment of Piazza Municipio. Project Third Place.

The project, third place, It provides the full pedestrianization of the square, with the exception of road access for loading and unloading goods and the Via Marconi and Via Horlonovo, strengthening the existing car park of the Monterosa Ski lifts; it provides for the maintenance of the natural and current soil inclinations.

Source. It involves the construction of a local stone fountain, a "bastion" of pedestrian paths branch. The water form redraws the panoptic relief of the valley, reporting on a horizontal plane segmented ridges of the surrounding mountains, silhouetted against the sky. A source, existing in alpine meadows "Milimatu" (original name), return to the surface, as a welcome point, meeting and union for the community; the horizon of the sky will alternate on earth and d 'water games, surrounded by a comfortable seat, will resonate with new life Square.

The fence. Bracket derives its name from the German Staffel, the stockyard formed with flakes or slabs of stone placed vertically. On the south side of the square, where it is not completed by the surrounding buildings, there is provided a concrete shelter covered with local stone and wood equipped with sittings. The cover, which will host the V in bronze works. Tavernari, interrupts the acoustic and visual continuity between the provincial road and pedestrian square. The discontinuous layers of the roof shooting, a contemporary, the poetic sequence of the roofs of the huts Dorf Walser. The vertical baffles coated wooden separating, maintaining a visual continuity, the sessions "Sliding". The indoor facility, framing the Black Lace and Monte Rosa, It will be the background in sports and commercial initiatives, and it may return to its internal, set in stone, the names of the families who want to contribute to the realization of the joint project, thus helping the Town Hall to offer a new perspective on a square by the many scenarios.

The flooring. The building of the Town Hall, bringing down their vertical projections of its facade, organizes the paving in local stone, also achievable in cement grit mixed with stone and containment curbs solid. A pre-existing diagonal sedime, connecting the Strait Lane with the way the Old Church, ideally ends the block which houses the C.A.I., framing the new roof in the project and the planting of a New Lime next company to Stay. The position angles of the square is contradicted by some "relevant markets". Each building will have its own dehors "soft", Solid-laid stone wire wood, or other durable material, bordered by curbs reflecting on giaciture and allinemanti of the first houses built here.

the Staffel, street furniture tourist and cultural promotion. From the design of the stone plaza of the emerging "Staffel", of rectangular logs in local stone that make up the system's primary tourism promotion and information of landscape resources, history and culture of the country; located in different parts of the square, in the vicinity of pedestrian or branches of special landscape value points act as backlit displays, enlivening the square as a whole through the discovery of 'identity of the country. A web application will allow you to enable and "give voice" to the exhibitors, on which multiple audio media. Following the guidelines of the new design of the square, other "Staffel" in local stone will emerge from the ground offering stable sessions. Imagine how simple solid quarry stone local, They will be partially processed as antique troughs, to accommodate summer planters and stable sessions, with a side lighting that ideally takes up the valuable characteristics found in the enlightened path "with little lights" that the Old Church door at the Sports Center and in the Garden Michelangelo.

Project Phase. The project involves the first phase the partial pedestrianization of the square, until Via Marconi, with the realization of the shelter (with its solid wood floor) in the pedestrian plaza protection; Furthermore the construction of the fountain / source, in blocks of local stone, as the epicenter of life in the country. The reuse of the sediment in the asphalt with a mixture of stone aggregates, It will give new life to changing paths that meander from the square. Integrated lighting in the fountain, animated by water features, and the shelter will give light and shelter for the conduct of annual initiatives planned (such as the Fair of San Bernardo). In this first phase it is maintained the mechanical disposal of winter snows, partly accumulated on the fountain itself (to form an "ice mountain" where children can play in the winter), partially disposed in Rio Tambac, next to hotel Dufour.

Project Phase II. In the second phase of the project provides for the lifting of the road surface, the harmonic regularization of slopes, the reorganization of the water collection; the realization of a new screed equipped with an external heating coils embedded in (whose thermal plant, hydraulic or electric, It will be located in the basement of City Hall) It will favor the melting of the winter snows preventing their accumulation and saving the annual costs of disposal snow; the paving in local stone slabs sawn (alternatively, grit concrete and stone) together with sessions integrated with planters and lights, to "Staffel" information, will complete the works of redevelopment of a square reinterpreted as a modern and new "business card" for Macugnaga, new source for tourism and economic revival of the country. 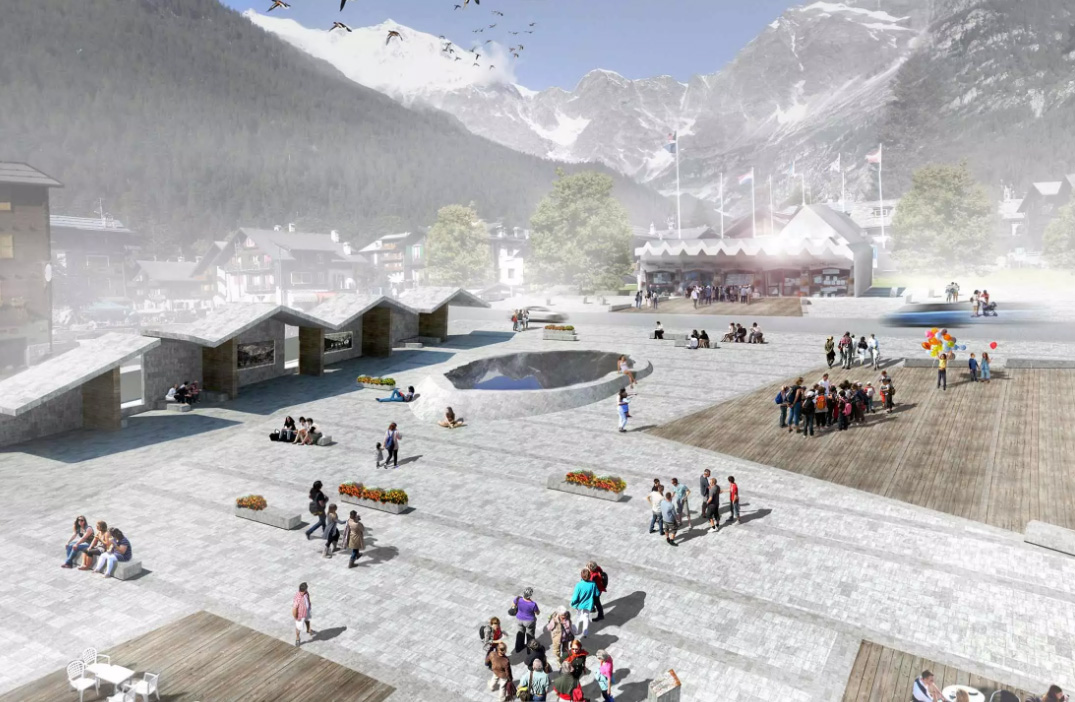 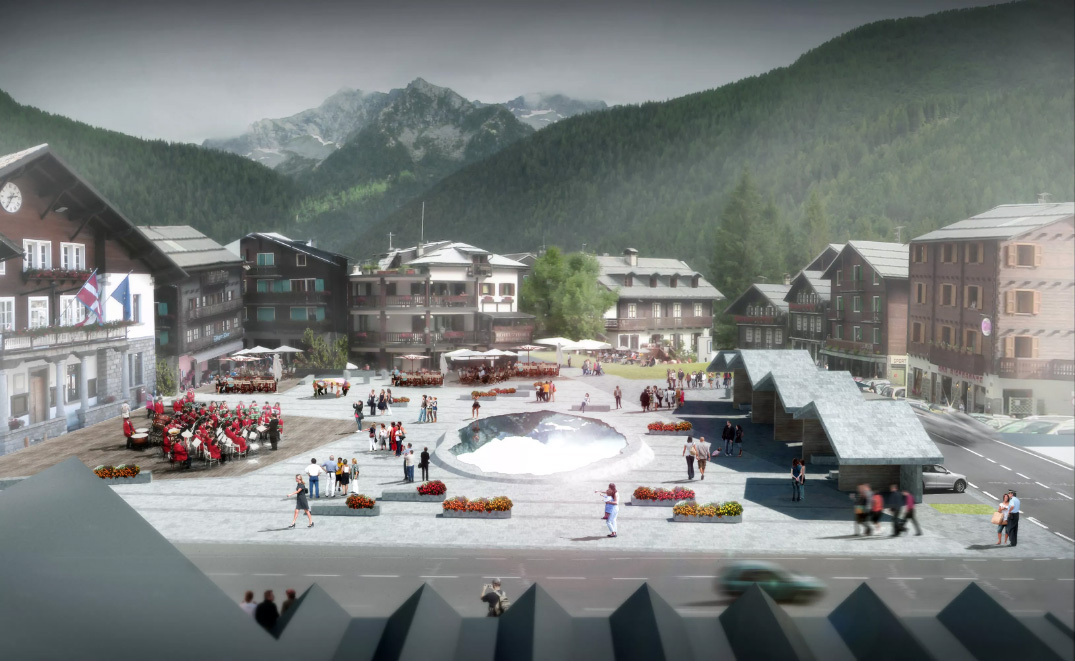 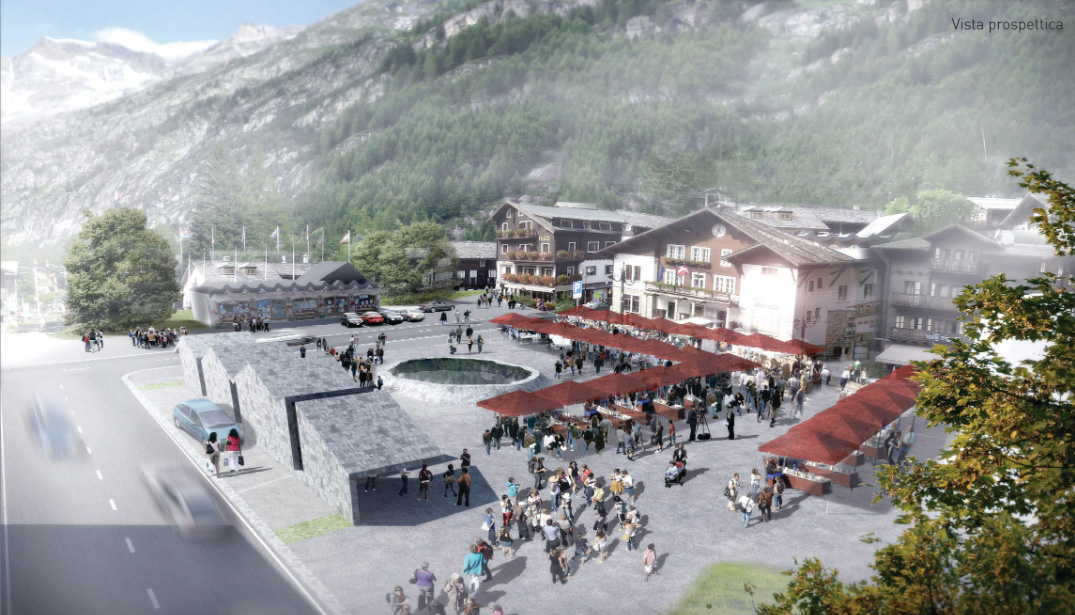 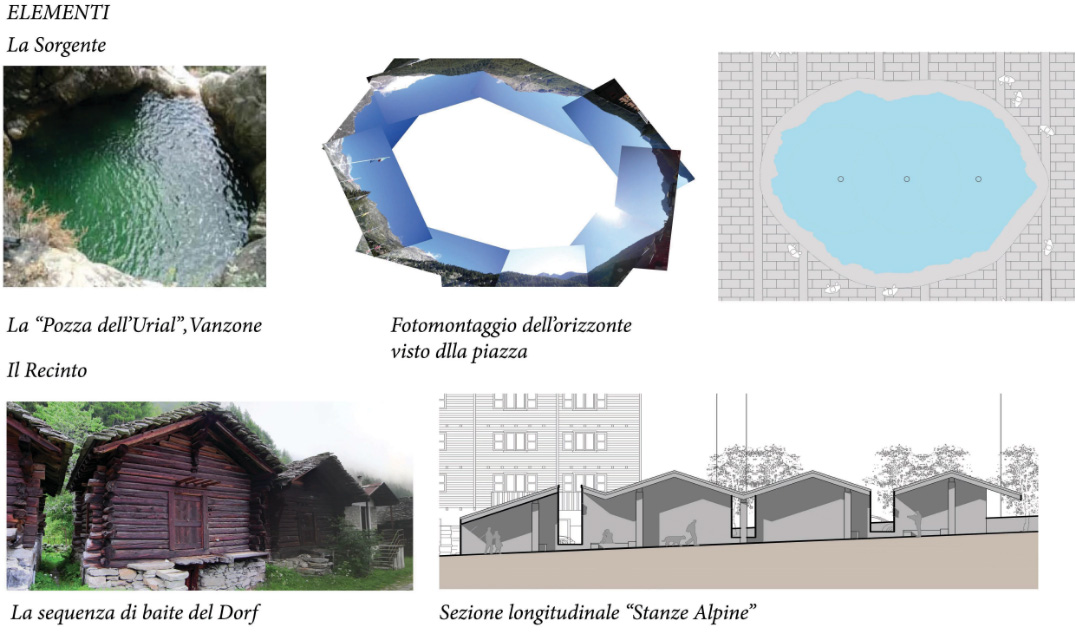 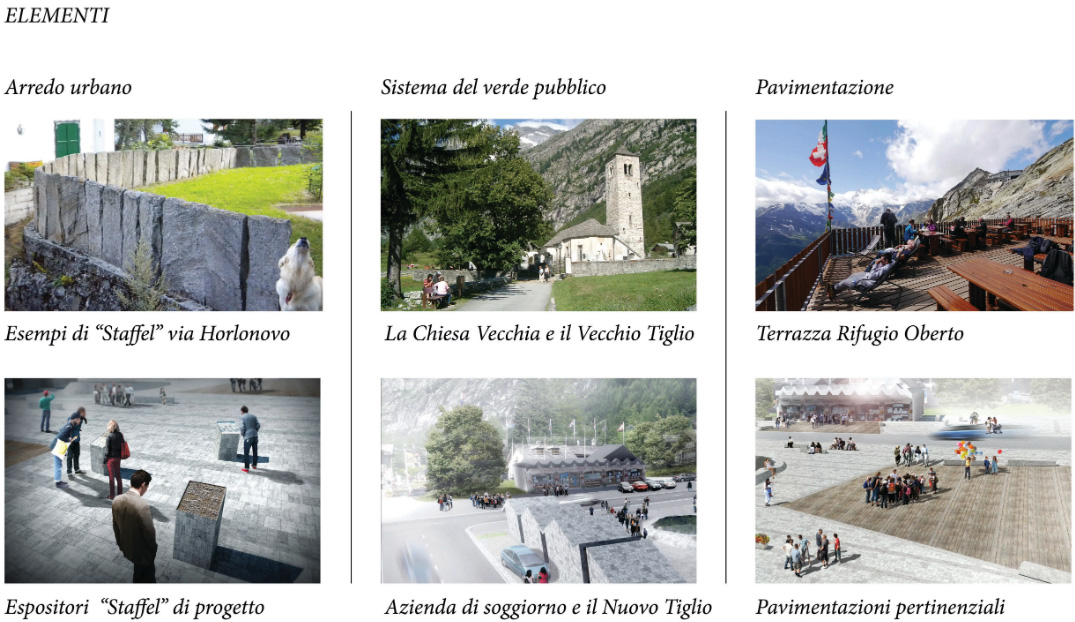 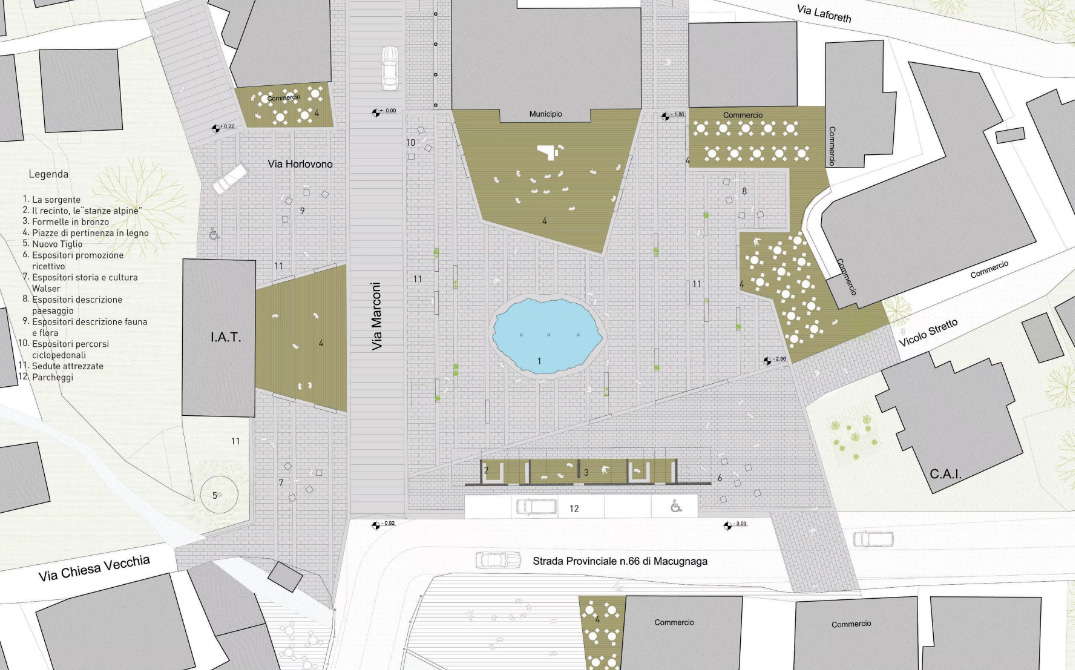