The market is the narration of a centrality around which a community and a place are identified. The project for the new Market in Piazza San Giovanni di Dio draws strength from the proximity alignments of the Gianicolense circular, overlooked by buildings from the forties, via Ozanam and via Ghisleri. The proposal divides the Market into three separate units, connected internally by paths and two squares, to ensure greater flexibility of production by parts, compartmentalised use and continuity of service.
The buildings are distributed on a single floor with a single span with a pitched green roof about seven meters high, to reduce the heat island effect and contribute to a total permeable surface of about 50% of the lot; The basement, accessible by two one-way ramps with entrance in Via Ozanam and exit in Via Ghisleri, it houses public parking lots. Near public transport stops, overlooking the "Piazza delle Erbe", partially covered with a structure in tapered "tree" metal pillars and corten-colored metal roof where colored photovoltaic systems are integrated (beyond 1550 sq.m.) and where they find shelter 21 stand for agricultural producers, first representative entry threshold to the Market. Three buildings with a trapezoidal plan overlook the "Piazza delle Erbe" (provided with structure in Xlam, rivestimento esterno con facciata verde con telaio ancorato alla muratura, exposed pitched roofs and skylights), where the stands of 98 operators (food and non-food, florists, workshops) along comb paths of 3 m with direct access to both the internal square and the external streets, in case of evacuation. The building on Via Ozanam opens onto a service square for all three bodies, where changing rooms are located, toilets for operators, locale delivery, offices, local plants and fablab. Each block houses inside toilets and waste rooms, placed on the perimeter of the lot for easy access. Commercial forms – prefabricated in wood to be used in a first phase as external stands to be then re-inserted into the new structure – I'm from 17 square meters each, aperti verso le vie interne e dotati di depositi di 6 sq.m.. On the square, which connects the different dimensions of the lot, the market is distributed, the activities of fablabs, temporary showrooms and a cafeteria. The ribbon showcases that delimit the main paths of the market, provided with corten finish metal structure and sliding openings, lead to a public path, filtered from the passing cafeteria, connection between buildings and meeting point between workers and users, where temporary shops and shared showrooms are also located. Path, near Via Ghisleri, leads to the "Piazza food for the mind", planned for cultural activities, for recreation and rest, equipped with two experimental gardens for children and a sculptural seat that protects from the surrounding traffic. The flooring of the market is provided in concrete with a photocatalytic finish; the outdoor green areas, where they are planted 25 mulberry trees, are provided in calcestre. The proposal, which responds to precise functional indications and the search for an order between the parties, provides that the market is a part of the city to be reconnected with the existing one, in a relationship of relationship and dialogue. La proposta riflette al tempo stesso le sempre più invasive strategie di comunicazione in ambito architettonico volte a valorizzare la presunta reputazione ambientale degli edifici, mediante un uso disinvolto di richiami all’ambiente – oggetto anche di questo bando di concorso – spesso non supportati da risultati reali sul fronte del miglioramento dei processi produttivi adottati: il greenwashing. 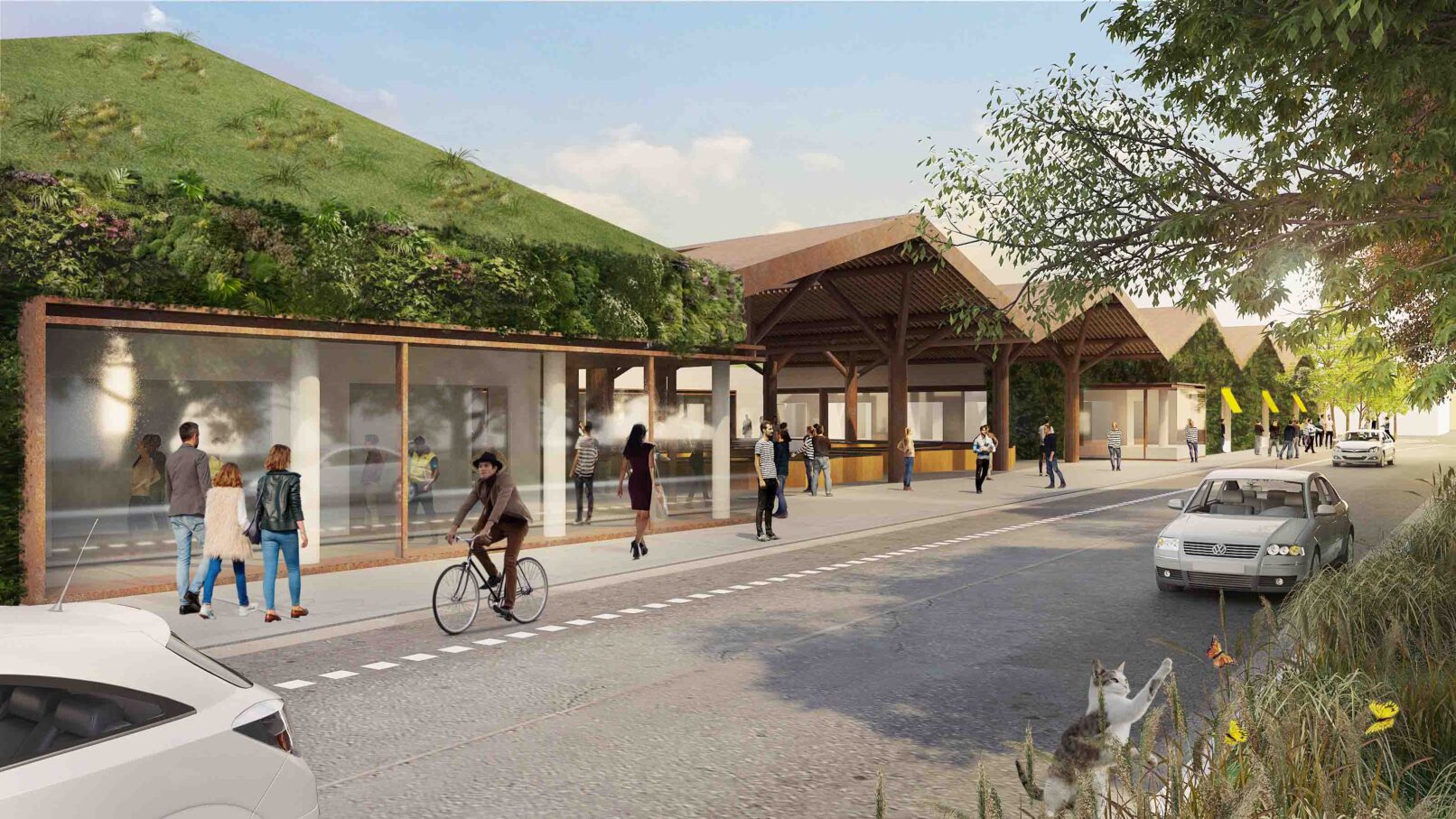 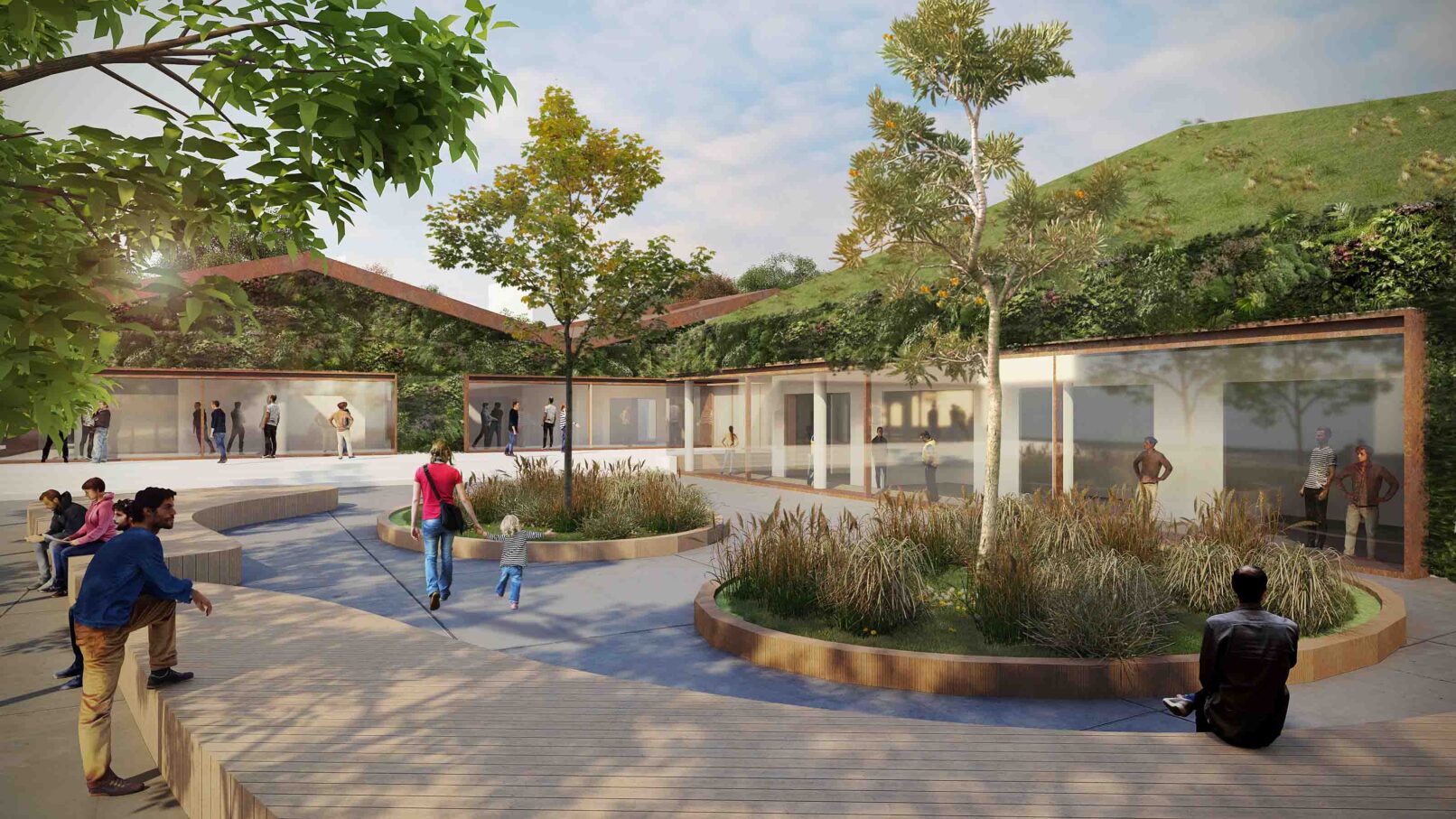 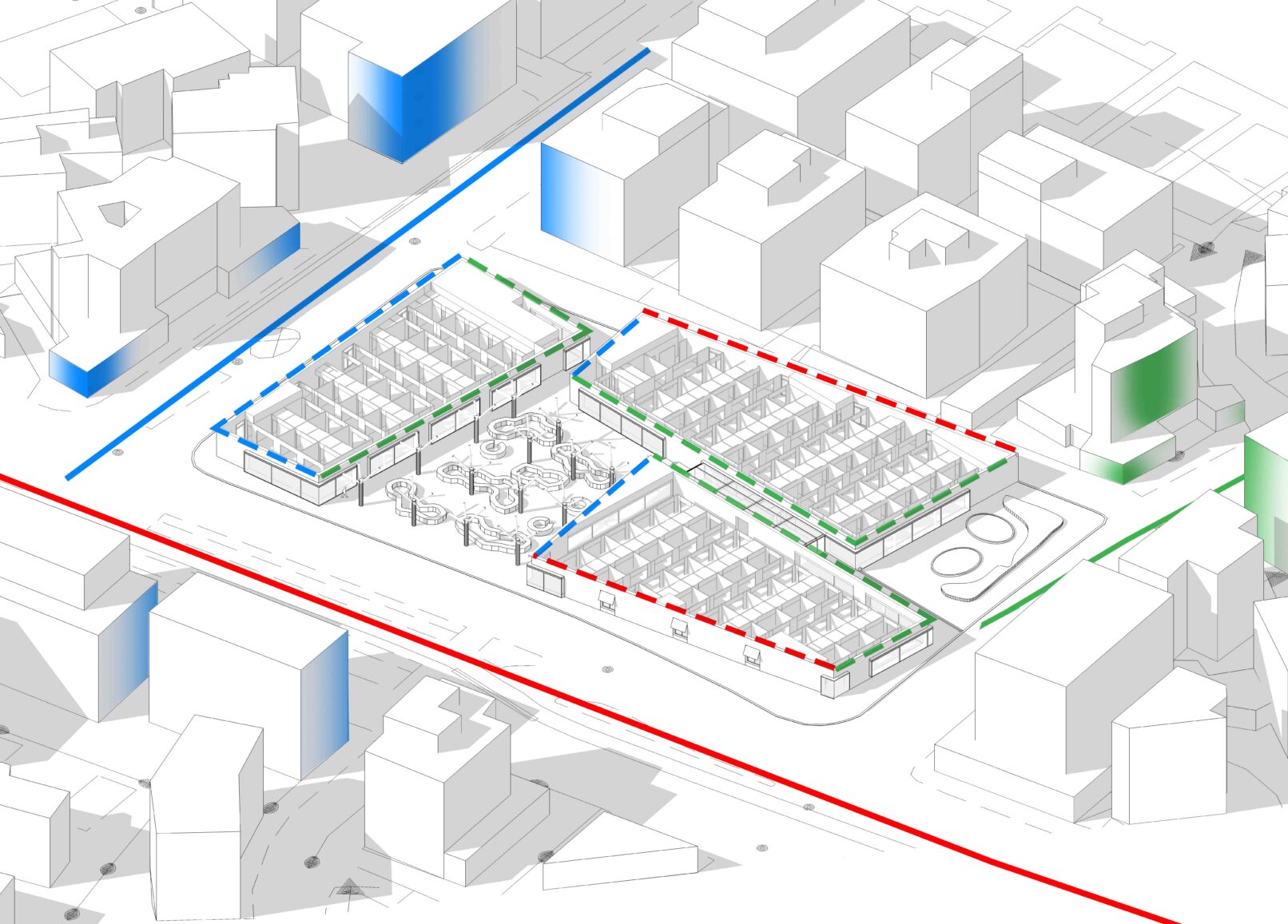 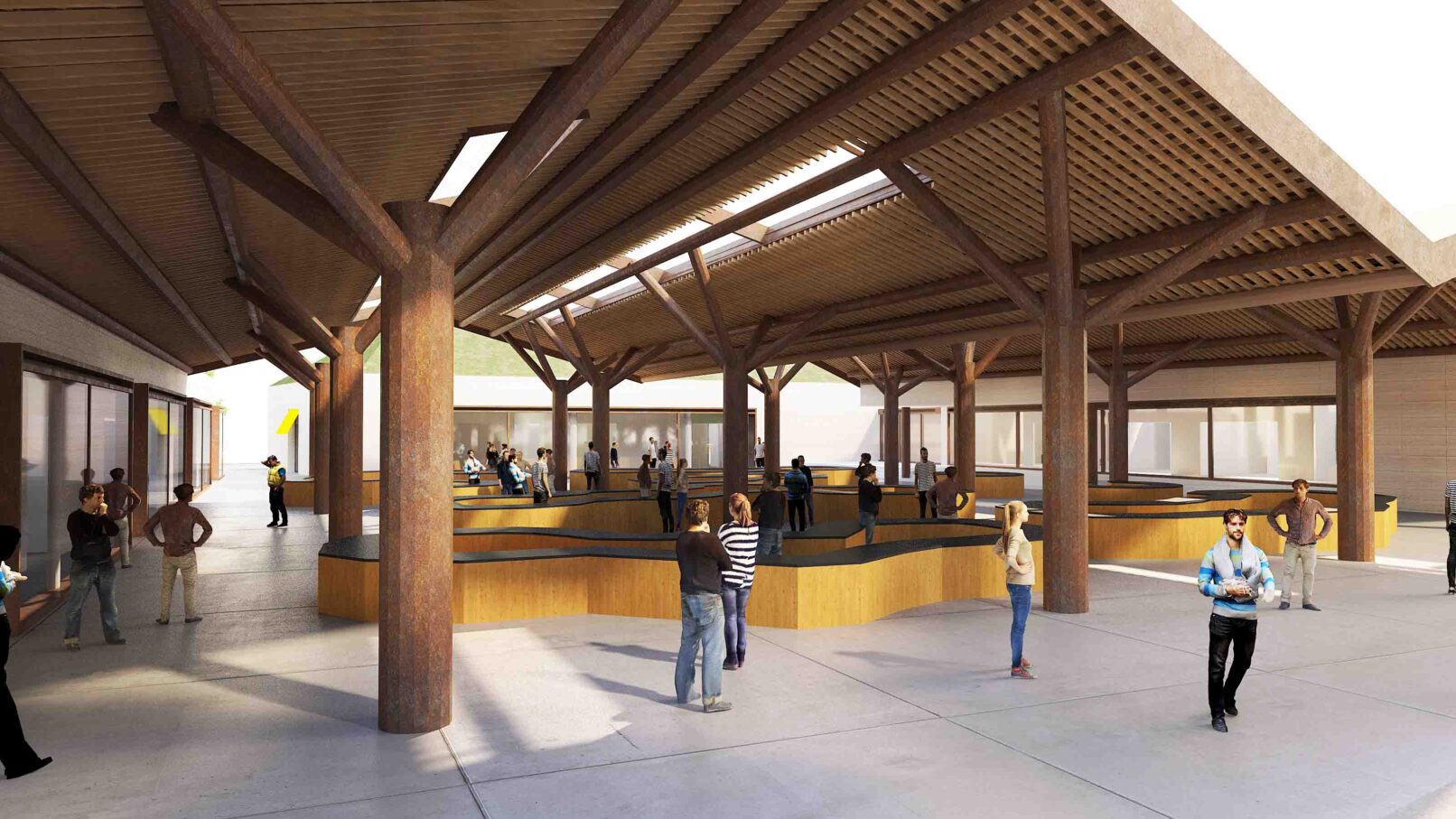 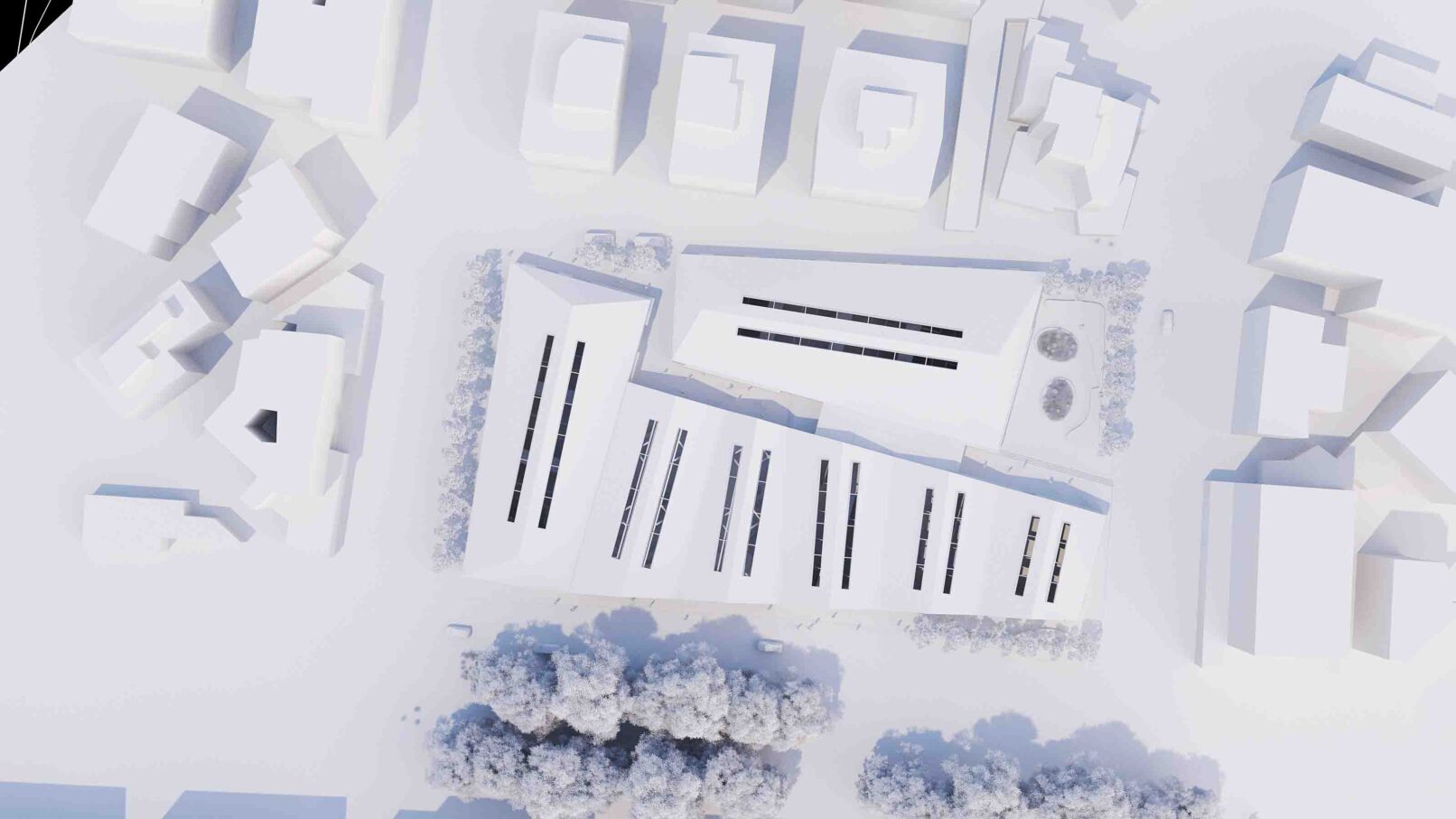